What the duck? ;-)  Have you seen the 40-foot "Rubber Duck" (a giant inflatable sculpture) that has made his long awaited debut by bobbing in The Hague Inlet as of yet?  If not, you must check him out.  He has already delighted thousands of visitors that have come far & wide (yes, apparently there’s even group of retirees who follow the icon internationally and now here nationally.)

Norfolk is hosting the enchanting artwork to celebrate the Chrysler Museum of Art’s grand re-opening; after being closed for nearly 2 years due to its expansion and renovation.

The adorable and friendly “celebrity” was designed and created by Dutch artist Florentijn Hofman.  Mr. Hofman chooses the venues in which his work will appear. And this is the Rubber Duck's first U.S. exhibit since Pittsburgh last fall when he kicked off the month long Pittsburgh International Festival of Firsts which attracted more than 1 million visitors to Point State Park.  The BIG duck will remain in front of the Chrysler Museum’s entrance, through May 26. 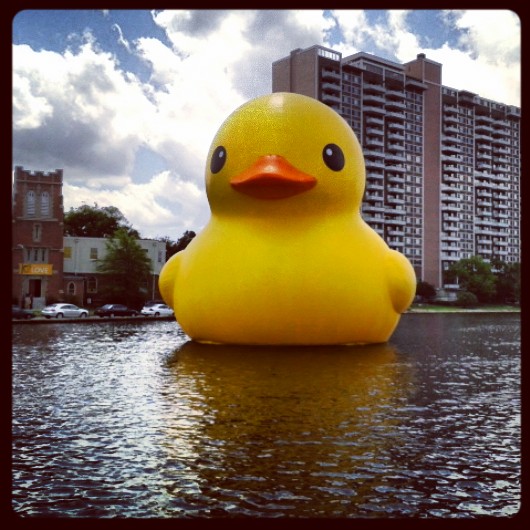 Mr. Hofman dreamed up the floating installment “Rubber Duck” back in 2001 while working on his graduate art degree. He was commissioned to build it for an exhibition in France, and went big — 85 feet.  While he has scaled back his inflatable art to now 40 feet, THE “Rubber Duck” has waddled the globe while paying a visit to China, England, Japan, New Zealand, Australia and Brazil since 2007.

The Chrysler took a quick survey and estimated that approximately 2,500 pictures were taken of the world’s largest bath toy during just Tuesday's lunch hour alone.   I can’t even imagine how many have been snapped since it floated through our harbor this past Saturday, May 17th.   When I walked over Saturday I was awe struck at just how many people came to not only check him out…but to take a pic with the famous duck.  It was amazing to see everyone connecting with one another just because of one piece of art.  But personally that is what I think makes art so great!   It’s 100% subjective and can be anything you want it to be. 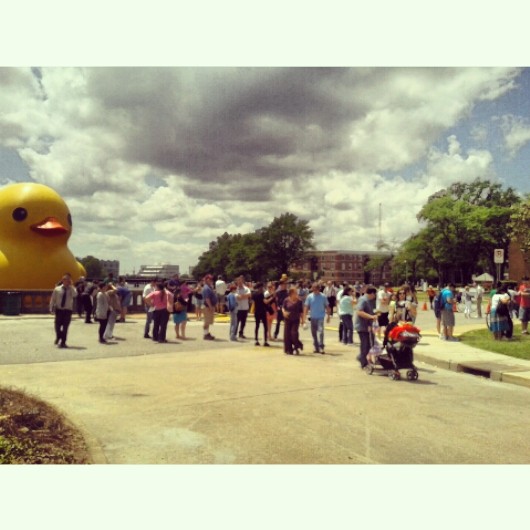 Mr. Hofman has been quoted as saying that he believes that the duck has "healing properties" because it knows no frontiers, doesn't discriminate and doesn't have a political connotation.  As a Museum …& Duck visitor myself, I second that notion.  I believe it’s bringing Hampton Roads together in a very unique way and honestly I will be a little sad to see him go.  But grateful he chose Norfolk to splash through!  Where else can you have one of the world's largest and feared battleships, as well as the world's largest floating children's toy just a few blocks apart?  The answer is Norfolk, VA….right now home to thousands of pictures taken every day with a rubber phenomenon that is captivating men, women, children…& dogs alike.  Who will be next?

Don’t just take my word for it…but check out this live view now: